A couple of weekends ago, Nigel and I attended our first Mega-Event Cache and with it came a few more firsts for us that weekend. The 25th October saw us heading off to Wakerley Great Wood near Corby for the annual Halloween Mega 2014. A Mega-Event Cache is an Event Cache that is attended by 500+ people. This year, 1,339 adults and children descended on Wakerley Great Woods for a day of "Creepy Caches & Halloween Hides" and with over four and a half thousand favourite points given to the various caches by attendees, I think it is safe to say that everyone had a mega time that weekend.

With a potential 64 caches to find during the event, Nige and I were set to break our record for "most finds in a day". Okay, so this wasn't going to be a difficult record to break - our previous total was only seventeen - and the caches themselves were not going to be difficult hides, but we still found it a challenge. Not including the event itself, we found and logged 61 caches that day including 10 lab caches, a letterbox cache, an earthcache, a mystery cache and a multi cache!

It took us twelve hours and about fifteen miles of walking. I got covered in mud, I busted my knee, and I managed to smack my head pretty hard on a branch in the dark, mainly because of my stupid decision to wear this during the evening:

At first it seemed like the Best Costume in the World Ever until we ventured out into the dark forest; I found that I couldn't see a damned thing and kept standing on my beard when ducking under branches. Despite all that we had an amazing weekend.

Attending an event of this magnitude shows just how diverse the geocaching population is. Young or old, two-legged humans or four-legged canines, alive or undead... we met them all. As we walked around from cache to cache, we kept bumping into people we had only just met that day and by the evening our brief "Howdies" to these strangers evolved into friendly banter and conversations of shared experiences. There was a sense of camaraderie that you rarely get at large events outside the geocaching world. 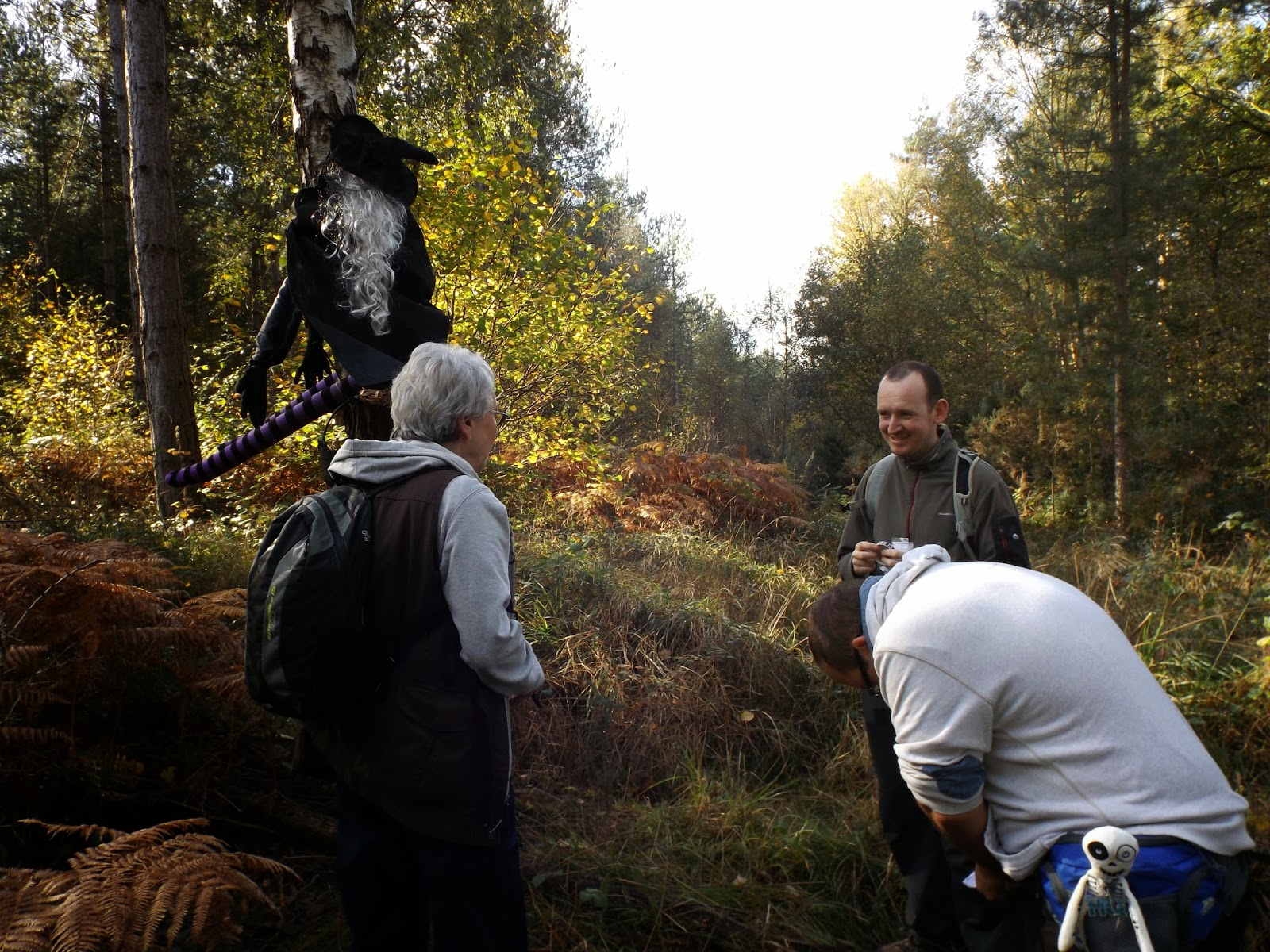 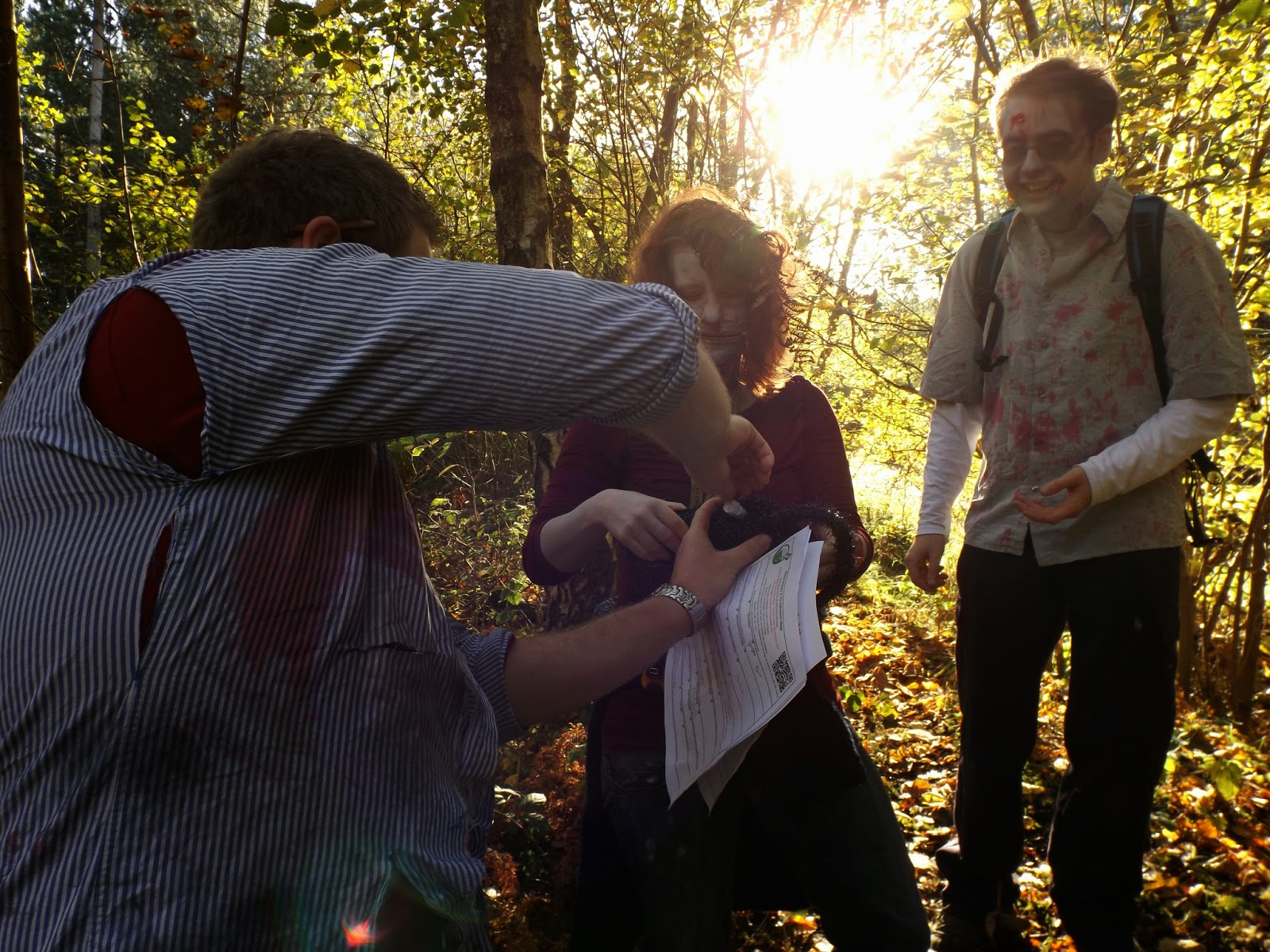 Everyone was so friendly; we had help from and gave help to many people throughout the day. We joined up with a group of zombies to help them solve the mystery cache, they were the slow moving George A. Romero kind though and we were on a mission so left them behind after a while. We had help from another group of cachers to find the multi cache and we worked together with others on the lab caches. 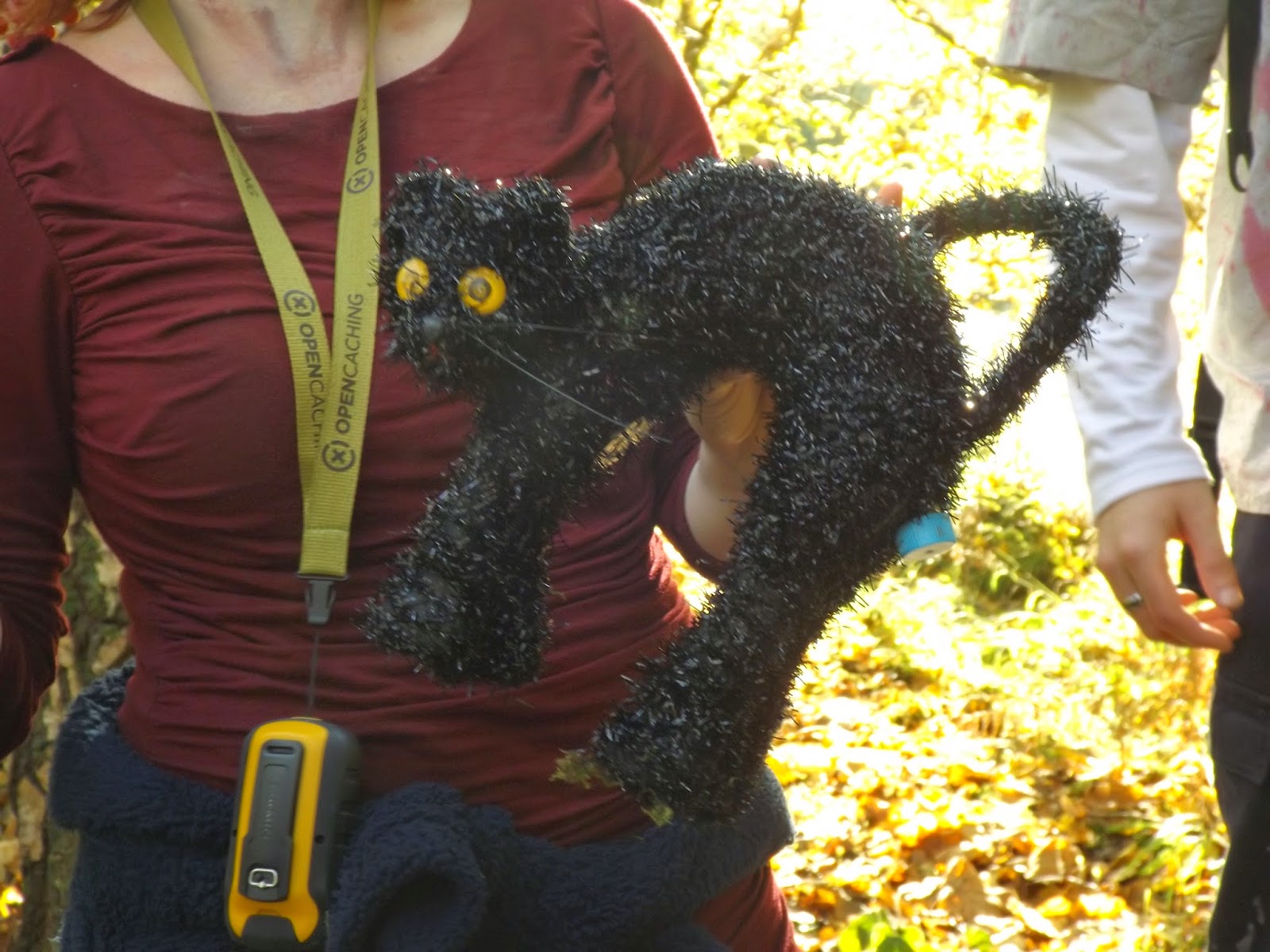 Heroic moment of the whole day though goes to Nigel and another man (whose name I didn't get). We were blessed with fantastic weather that day, being October I was expecting it to be either raining and/or cold, but within the woods the temperature was moderate enough that we didn't really need our jackets. However, the preceding week had been a bit of a wet one which transformed the area into swamp-like conditions that even Shrek would refuse to inhabit.

We had met a few people at the event that day that were in wheelchairs and mobility scooters and, all credit to them, they were getting about the woods remarkably well considering. However, conditions were anything but improving as darkness descended. We were walking along a particularly sloppy footpath when we heard a bit of a commotion behind us. We looked back to see a group of cachers that we had met earlier in the day. One of them was a lady in a mobility scooter, except it wasn't so mobile at the moment, it was wheel spinning in the mud and leaning precariously to one side. Just as the woman was about to receive a complementary Wakerley Wood face pack, Nigel and the unnamed man leapt into action through shin high mud and guided scooter and rider to sturdier ground!

Now onto the caches. Every single one of the unique cache containers were an amazing find and the organisers of the event, The Halloween Crew, deserve every single favourite point and then some for the effort they put into them all. There are too many to write about here so I shall just tell you about my favourite day and night caches from the event. 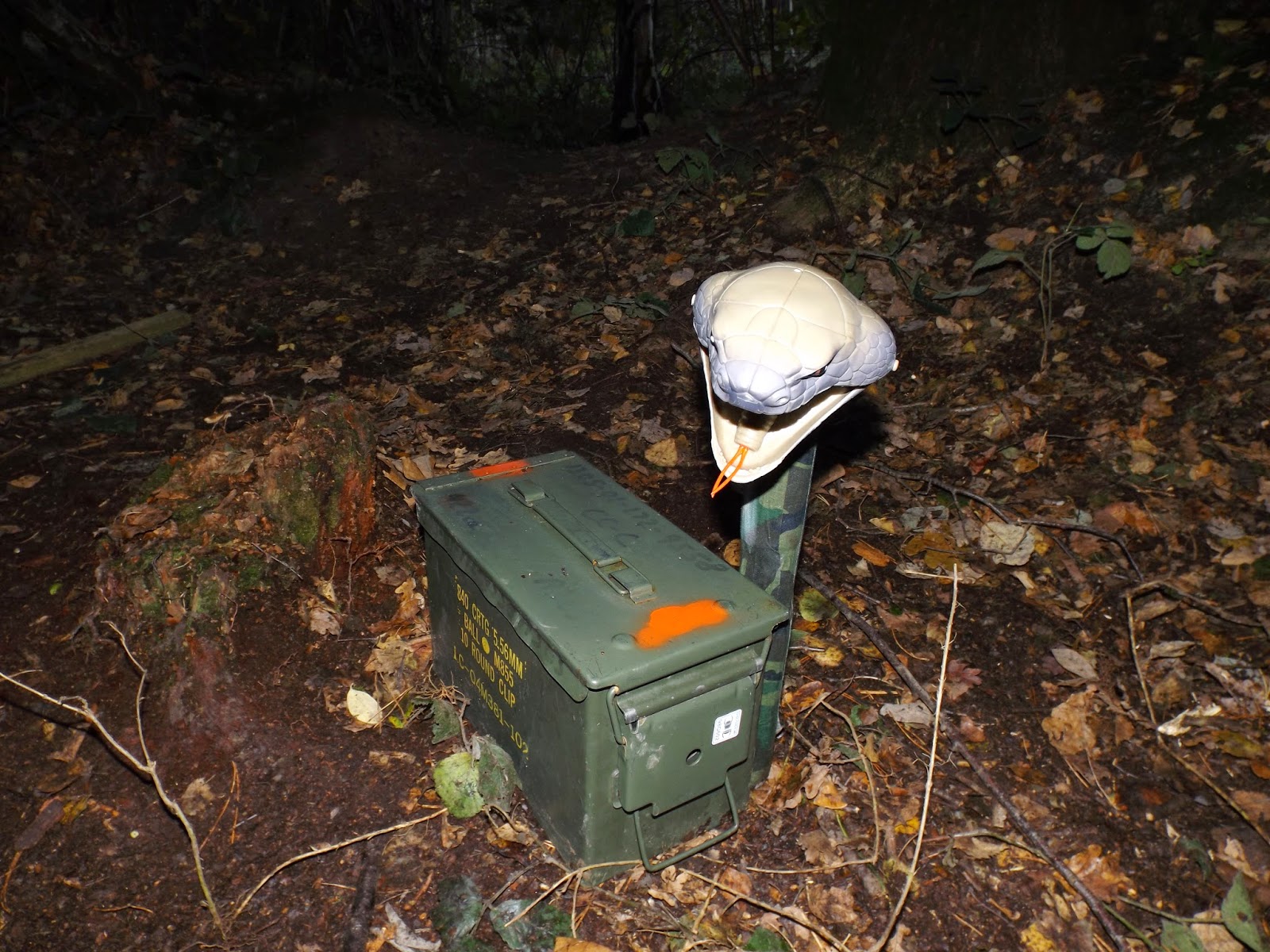 
It was approaching dinner time for me when we came across this cache so I didn't pay much attention to the name of it. Ground Zero was slightly of the beaten track, as were most of the caches throughout the day.

In my excitement at finding the container to be an ammo can - it's always a bit special to find one of these in the field - I rushed to open it up only for Spitting Sid to live up to his name! There was a mechanism inside the box that when opened caused Sid to squirt water right at his unsuspecting victim. Much to Nigel's amusement, I not only got wet retrieving the log but stupidly got another soaking putting it back! 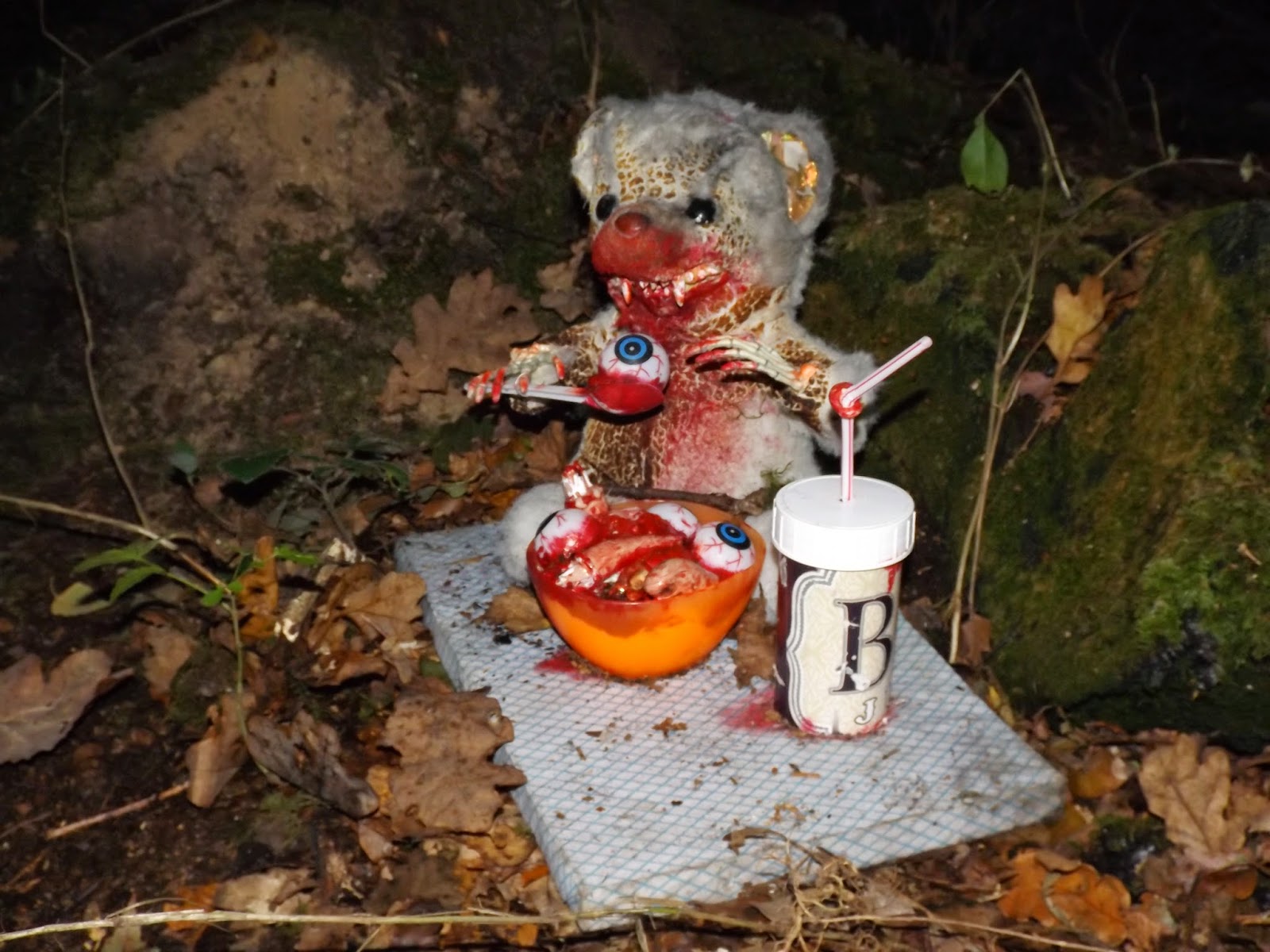 This was the last of the day caches that we found. Whoever created this beautifully gruesome piece of brilliance has a twisted mind! I loved it! It's probably a good thing that all the caches were replaced with Tupperware containers at midnight; can you imagine coming across this whilst in the woods out on your own? You wouldn't want to stick around for long that's for sure. The log book accompanying this creepy little dude was concealed in his cup. Fortunately, this one had no nasty surprises when you opened it up.

This was my second favourite cache of the whole day. A cache with a shocking twist! - I'm sorry, that was a terrible joke. This genius piece of engineering was far from terrible though. There was a box on the side of the chair that contained the log book. When opened, the chair started to 'charge up' and everyone nearby took a nervous step backwards. As the sound reached it's crescendo the poor soul in the chair began shaking violently and lit up like a lantern!

Even though this cache has made an appearance at previous Halloween Megas, it still remains a firm favourite amongst event goers. 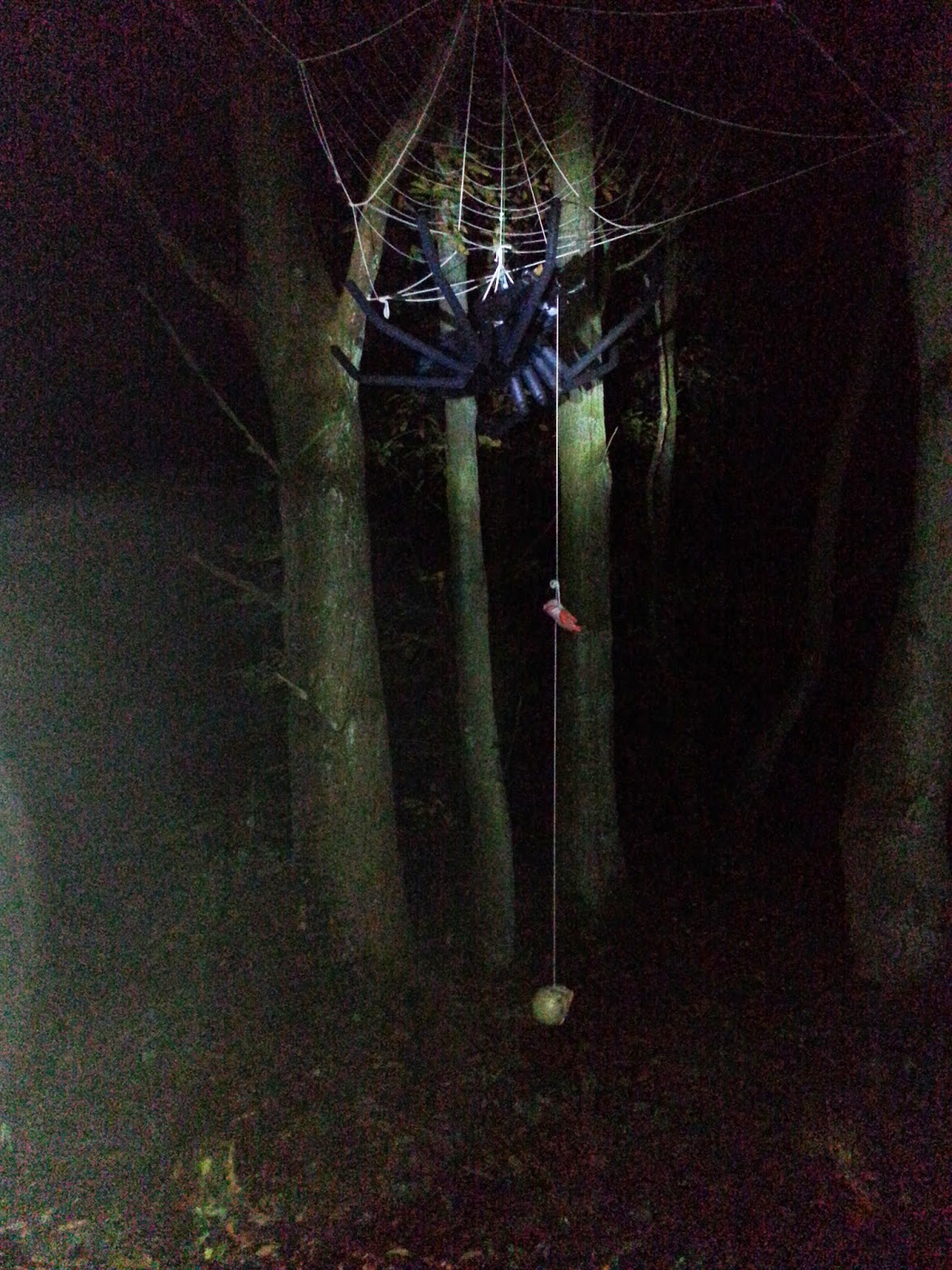 As with most of the caches we seeked out during the day, there was a small crowd of cachers surrounding this one as we approached. Being small, I could not see what was up ahead, I didn't need to see it though to know that this find was going to be special.

As I wound my way through the gathering of people to get a look at the cache, a chilling sound arose from the darkness ahead. There were gasps and nervous laughter from all around me. I emerged from the crowd, looked up and stood in awe at what I could see above me. About 20 feet up in the trees was a giant spider hanging from it's web. The log book was inside the skull that you can see at the bottom of the photo.

We couldn't see how the sound and movement was activated, we guessed that it was when someone attempted to retrieve the log book. I kind of wish that there had been no other cachers there when we found this one as I bet this would have been super creepy to find on your own.

This was by far the most impressive cache for me at the event, not just for the fact that it was the most monstrously nightmarish hide there, but also because of the time, effort and skill to put something like this together. I have heard that it took about 3 hours just to put it in place!

That is definitely not something you would like to come across in the woods at the dead of night on your own! Except if you're a horror fan like me and think that, although scary, it would be awesome!

The above videos were filmed by Adam of caching trio the3maslankas. Please take a little time to visit his youtube channel by clicking here.

Overall, Nige and I had an amazing weekend, even though we couldn't move the next morning because we ached so much! If you have never been to the Halloween Mega Event before then I urge you to go next year... we definitely will be.