'Tis the season when many a fair-weather geocacher packs away their GPSr for the winter, the inboxes of cache owners get a well deserved break as logs on hides begin to dwindle and everyone begins to get ready for the onslaught of Christmas. Only the hardiest of cachers will venture out at this time of year and, as I have discovered myself, this can be a magical time for geocaching adventurers.

I haven't blogged for a while as I have been busy as of late; demand for my time has been divided amongst family and friends, work, the forthcoming festivities and an ageing dog. However, I have made time for a little caching where I can, whether it be solving puzzle caches, finding caches or attending events. I won't bore you with all the details though, instead I shall tell you about a few of the highlights.

Before I do though, if I don't get the chance to blog between now and next year I hope you all have a... 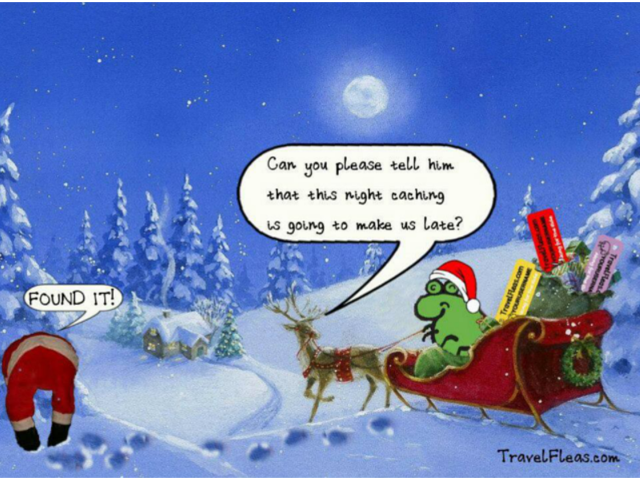 All For a Good Clause

The most recent event Nige and I attended was BBH#84 ~In spitting distance of all 3 counties, held at the Red Lion pub in Dagnall, Hertfordshire. We had a great time at the event catching up with some (now) familiar faces and meeting some new ones. We have been to a few BBH events now but this was - so far- the most fun one we have been to. Alibags did an amazing job of organising this event and it was, as is usual for any BBH event, very well attended.

Of course, there was plenty of talk of geocaching but also the event organiser had put together a few games of pass-the-parcel, something that many of us have not played since we were children. Prizes included boxes of chocolates and the coordinates of a yet-to-be-published geocache, the winner of which would be able to claim the coveted title of FTF.

This event was not only special because it was the last BBH event before Christmas and New Year, but also because a fellow cacher called IB Searching - who is the first geocaching friend I made - was there with a mission to raise some money for charity. Before I tell you how he was going to achieve this let me show you a picture of him...

"Following numerous queries about when I'm going to have a shave, I have decided that it is time that my 'Santa's Whiskers', as someone dubbed them, come off" said IB Searching and he would be doing it "in aid of The Brainstrust Charity."

The pub wouldn't allow the beard to come off inside the premises - which is understandable as it is a food establishment - so we all bundled outside to strip Santa of his beard. 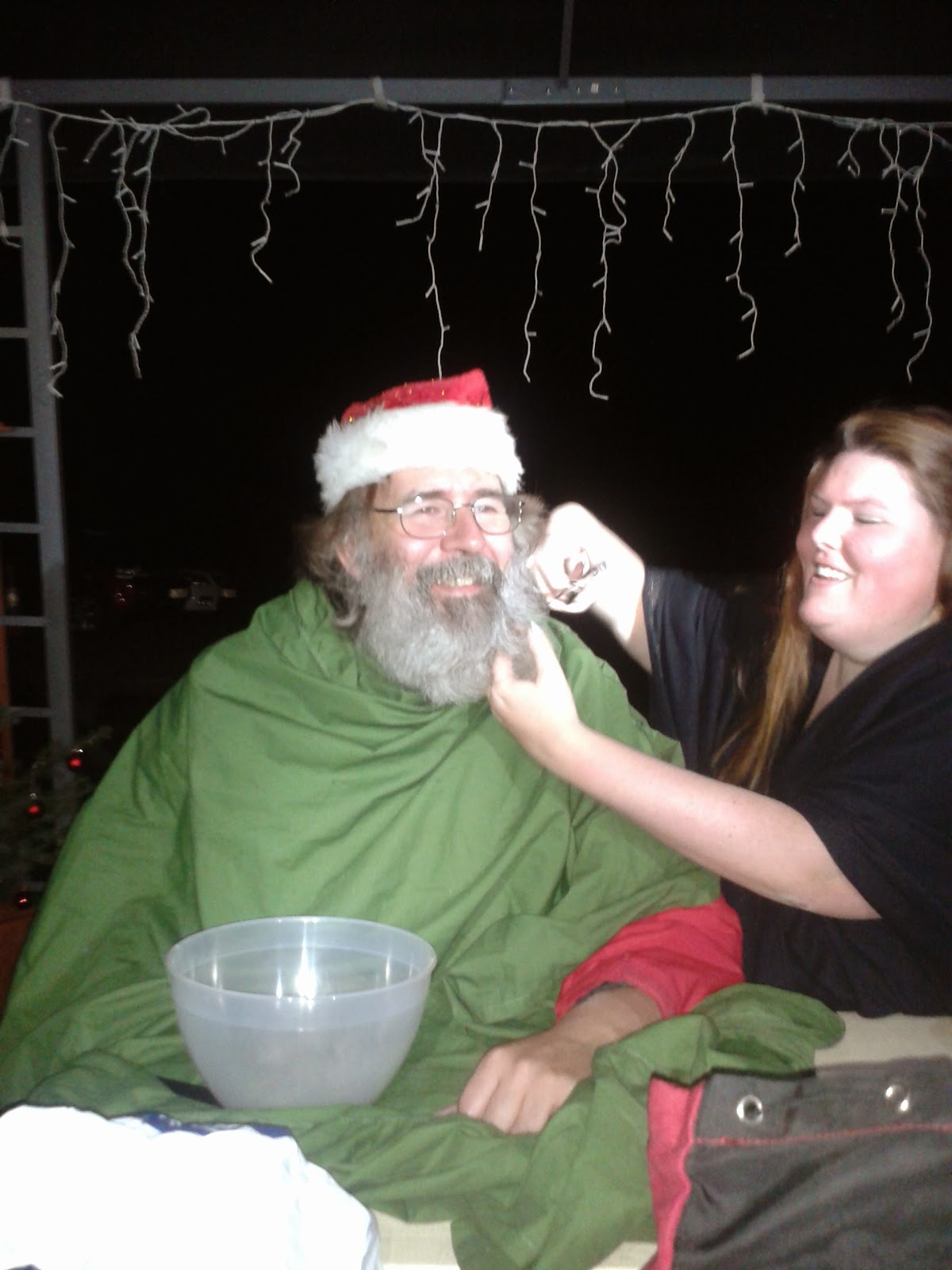 The transformation was remarkable and fortunately not a drop of blood was spilt as nearly everyone had a go at chopping bits off.

With the face fur gone, we retreated back to the warmth and our drinks to continue the party. Everyone dug deep that evening and a lot of money was raised for charity, so congratulations to IB Searching, I'm guessing a scarf is high on his Christmas wish list now though. 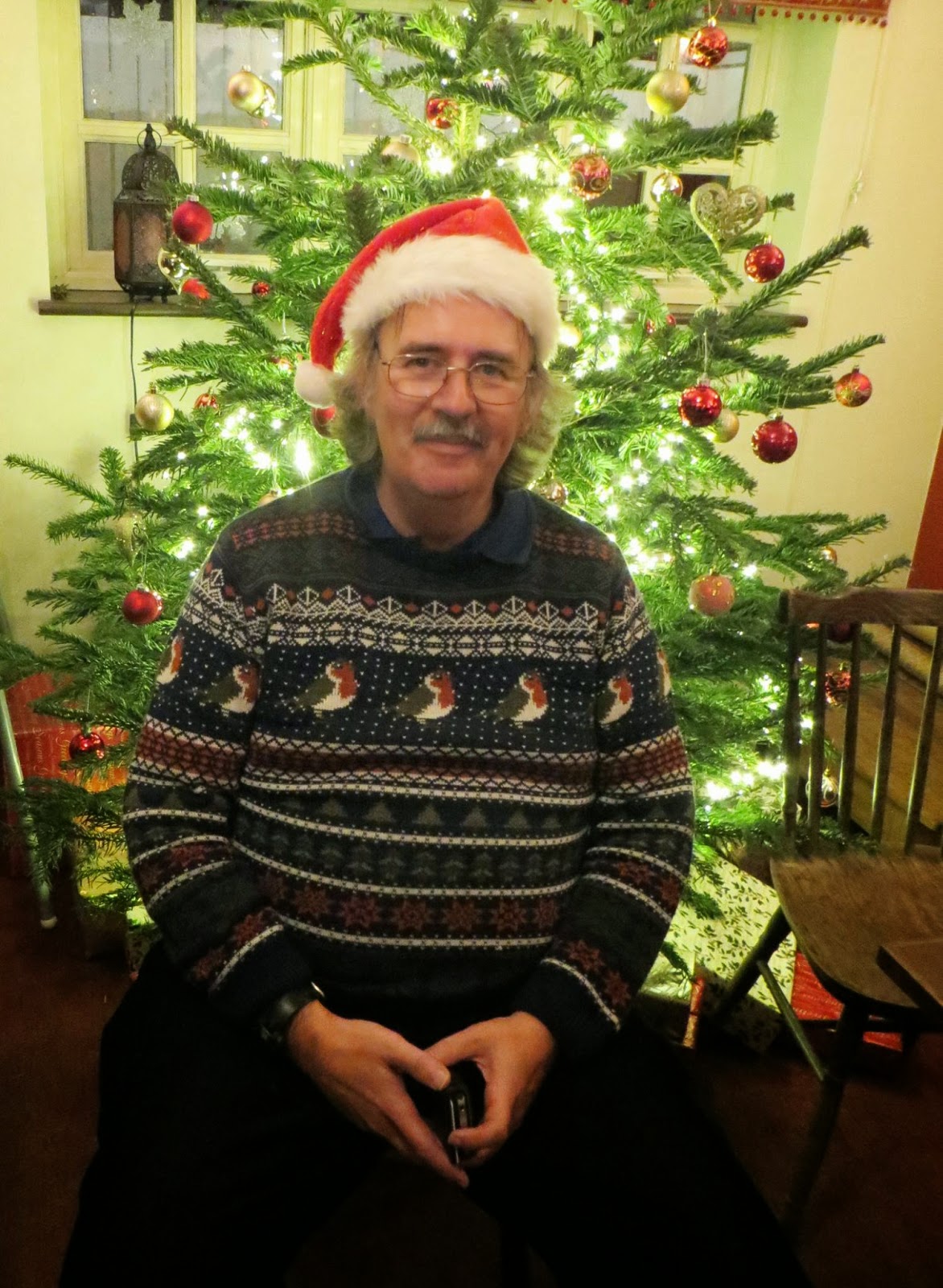 If you would like to see how we mutilated Santa, then there is video evidence!

Like I said earlier, I haven't been out caching as much as I would have liked to over the past few months. With the shorter days, I have found it better to go out and find single caches here and there rather than the trails that we were doing in the summer months. Although the cold weather can easily dissuade me from going outside, I have found that the different sights and colours that Mother Nature can paint at this time of year make it all worth it.

It was late afternoon when Nige and I arrived in Woburn, Bedfordshire to find a multi cache called "Dear Abi" located on the stately grounds of Woburn Abbey. We parked in the free car park as suggested and started our walk up towards the Abbey and Gardens. We have visited the Abbey before but have only ever driven through the surrounding parts until that day.

We got to the ticket booth and as we were unsure whether the hunt for the cache would take us away from the "free" footpaths, we paid a small fee to gain entry. It was only later that we realised that you only need to pay to gain access to the Abbey gardens and the tea shop, neither of which we had the time to visit after finding the cache. 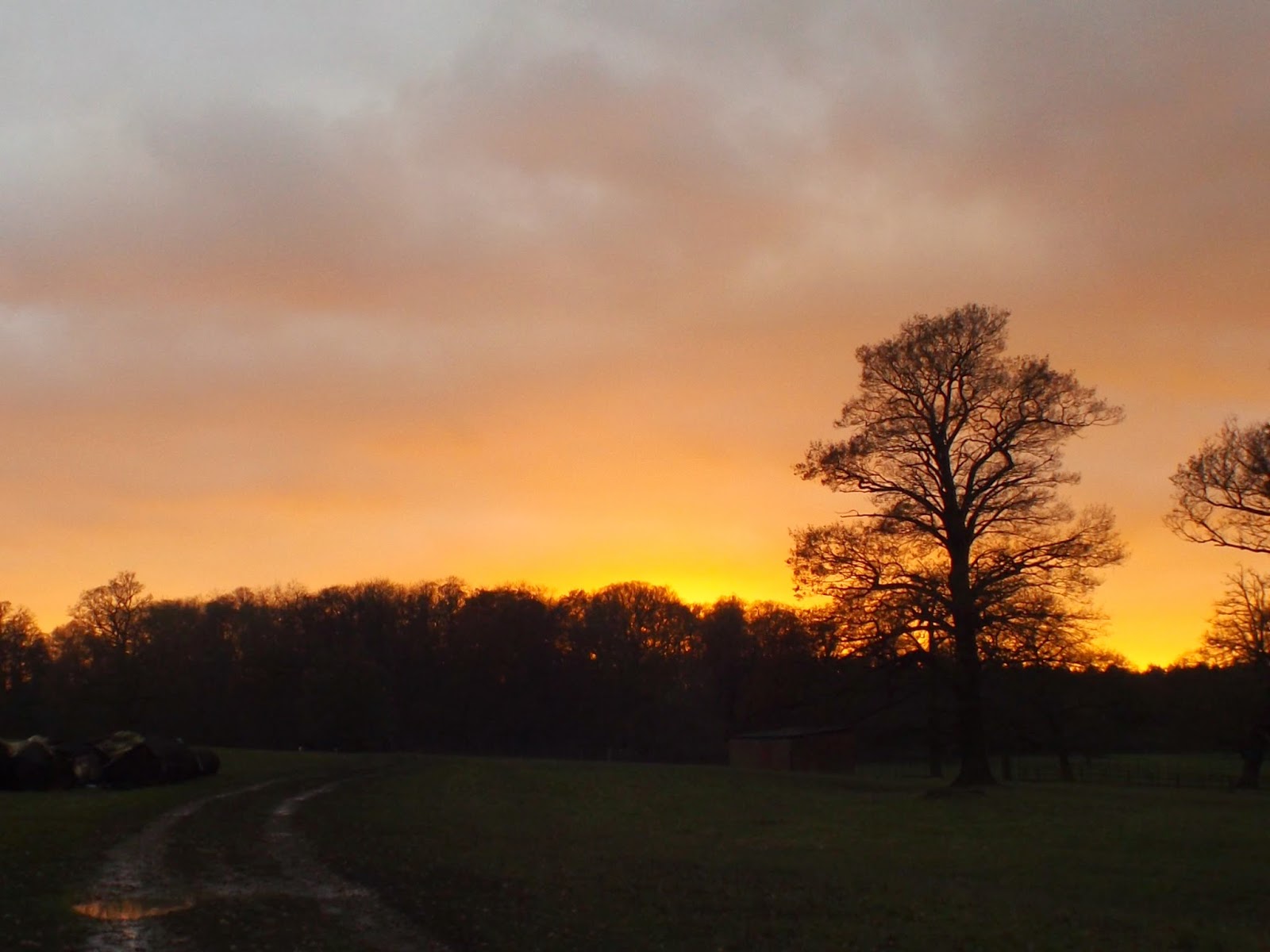 As we walked around, the sun was beginning to go down. It didn't take us long to find the first stage of this multi. The going was very muddy in places but the views were amazing and I got some great photos of the deer. We couldn't believe how many of them there were.

When we approached GZ of the final stage, there was a moment when we thought we weren't going to be able to get to it as there was a huge herd of deer right where we wanted to look. We waited for a while and eventually they moved on. 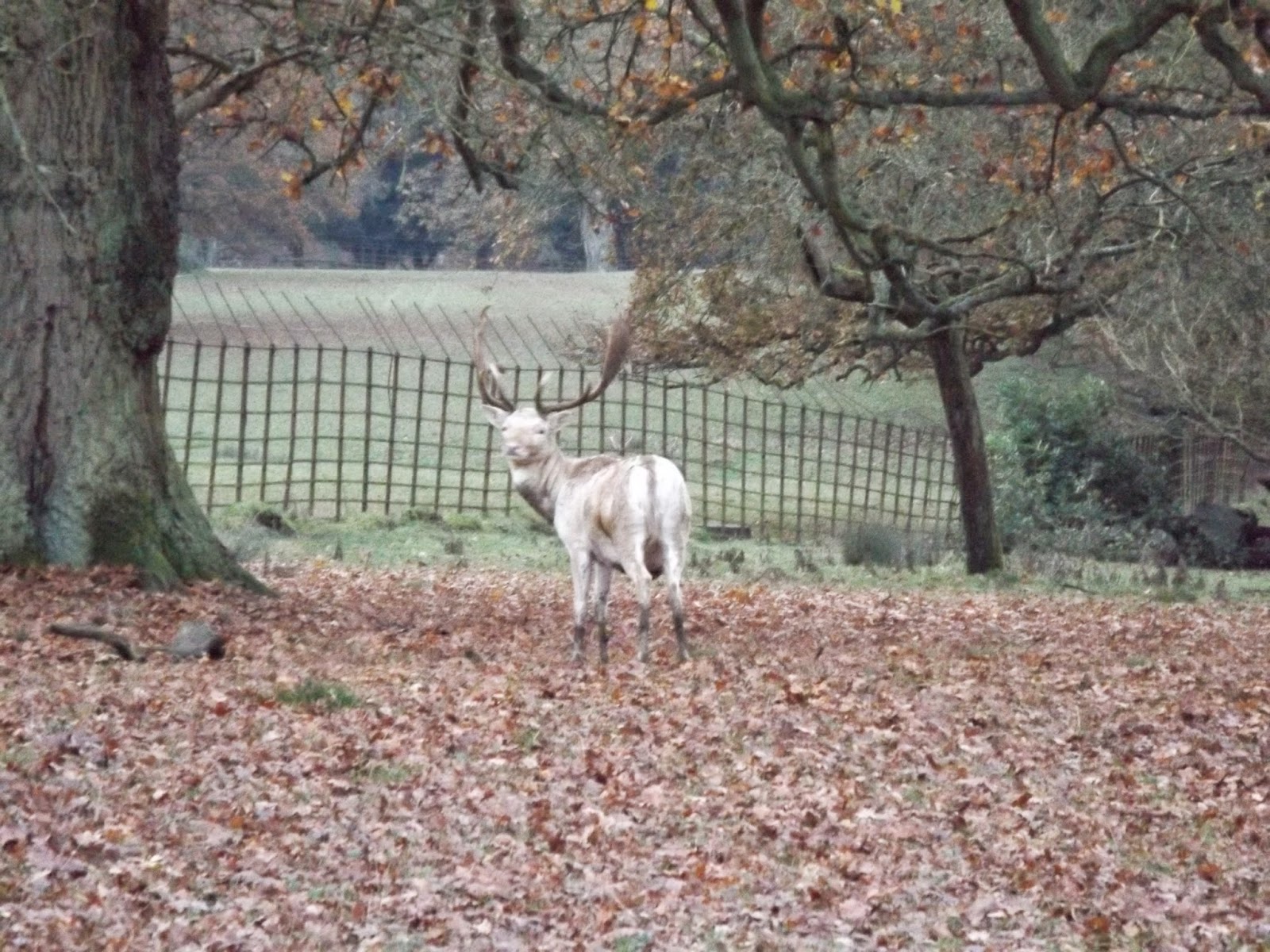 At this point my GPSr began to play up (turns out the batteries were beginning to die) so we had a little difficulty finding the cache. There were only a few possible locations to hide a cache though so we spread out and, using the hint, found the cache in the end. We had a wonderful time finding this cache, it is such a beautiful area and it was great to see all the deer up close. We even saw some reindeer which only served to remind how fast the festive season had crept up on us! 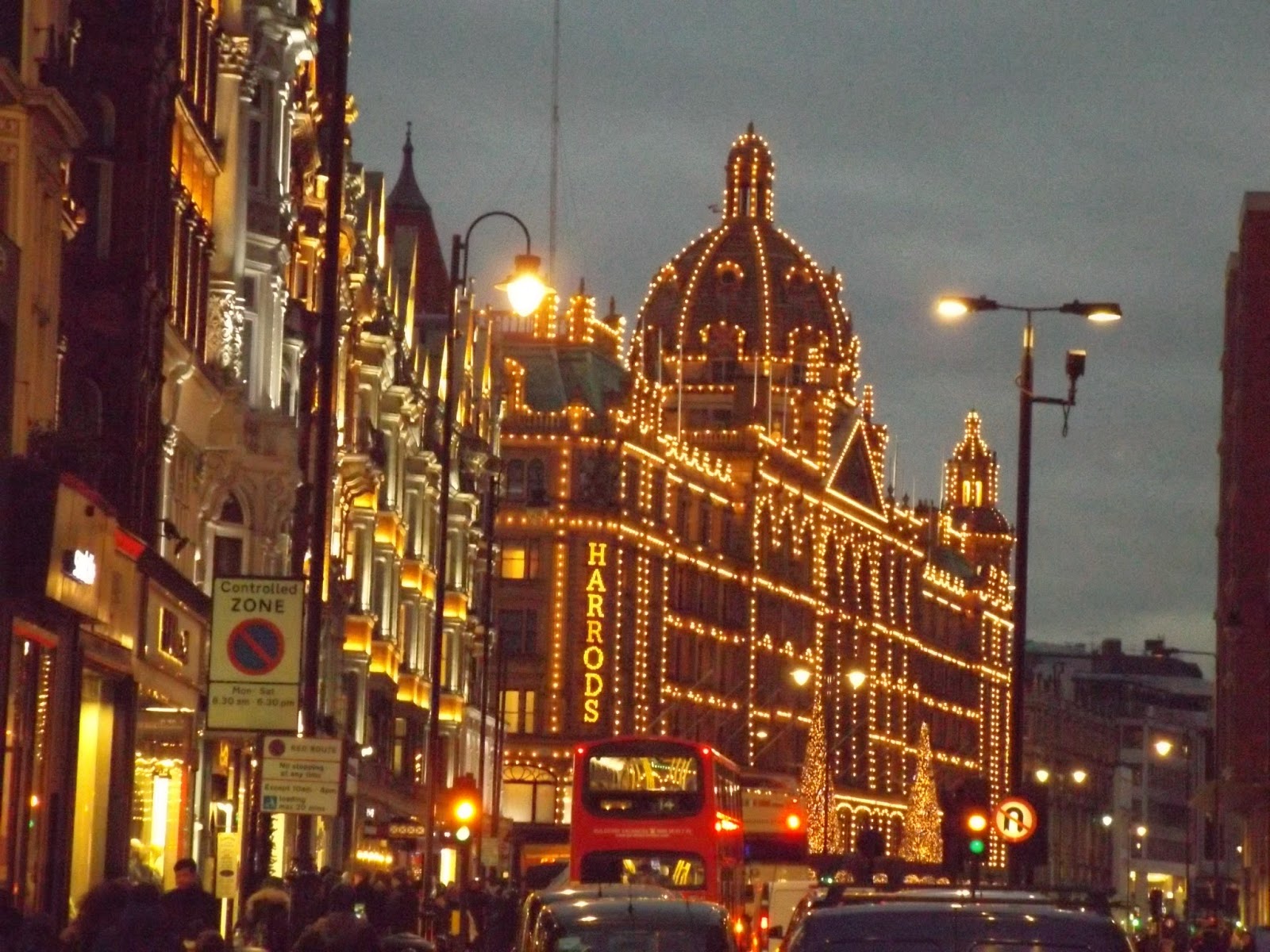 It wouldn't be Christmas for us without a trip to London. This year had the added bonus that I was now a geocacher! Despite my best intentions though - pocket query of a thousand caches downloaded, a few puzzles solved and a couple of select caches as recommended by some fellow cachers - I managed to find a grand total of two! And not even very good ones at that! Ah well, there is always next year. I managed to snap some good photos though and it's always fun to visit Hyde Park at Christmas. 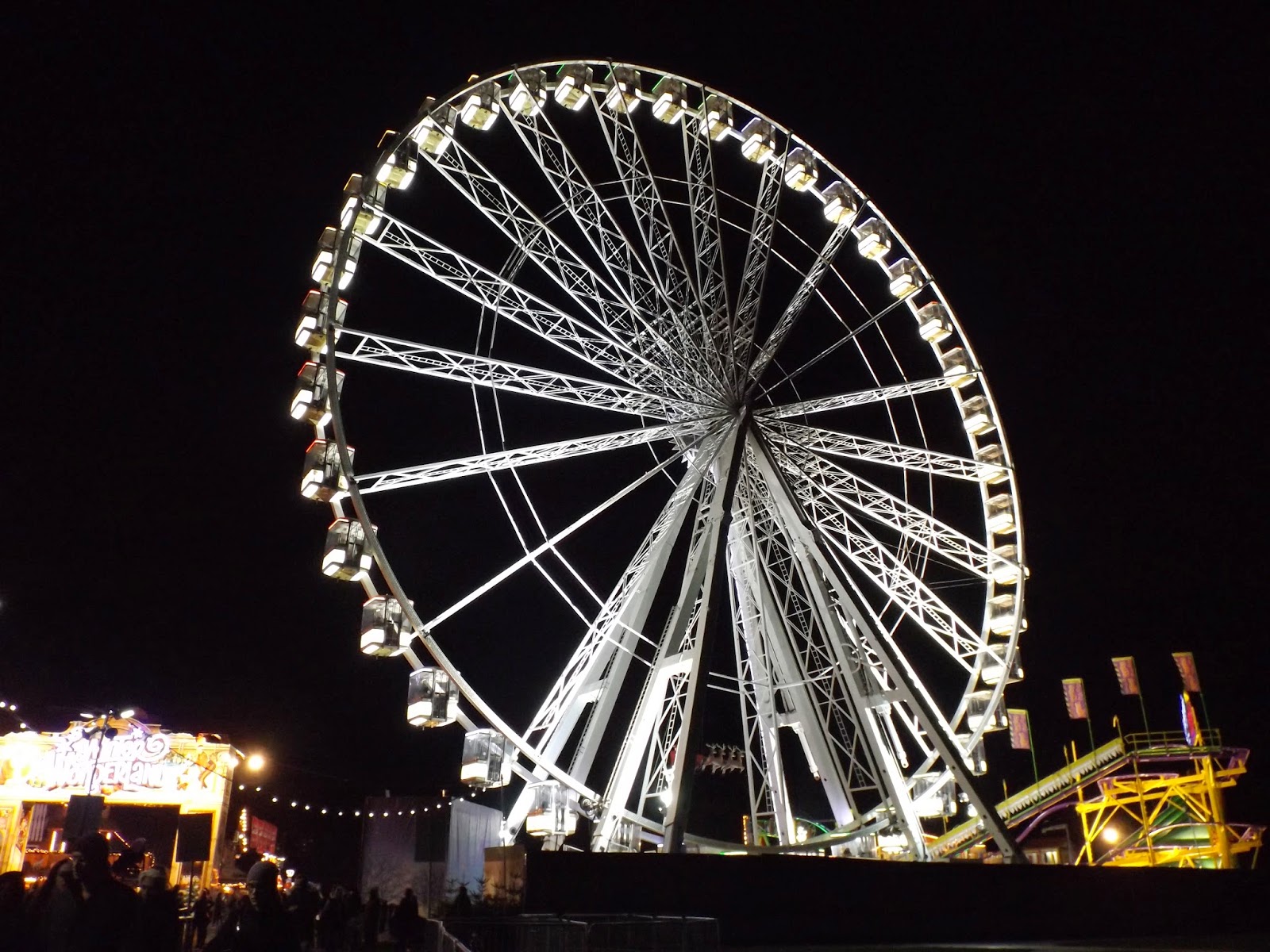 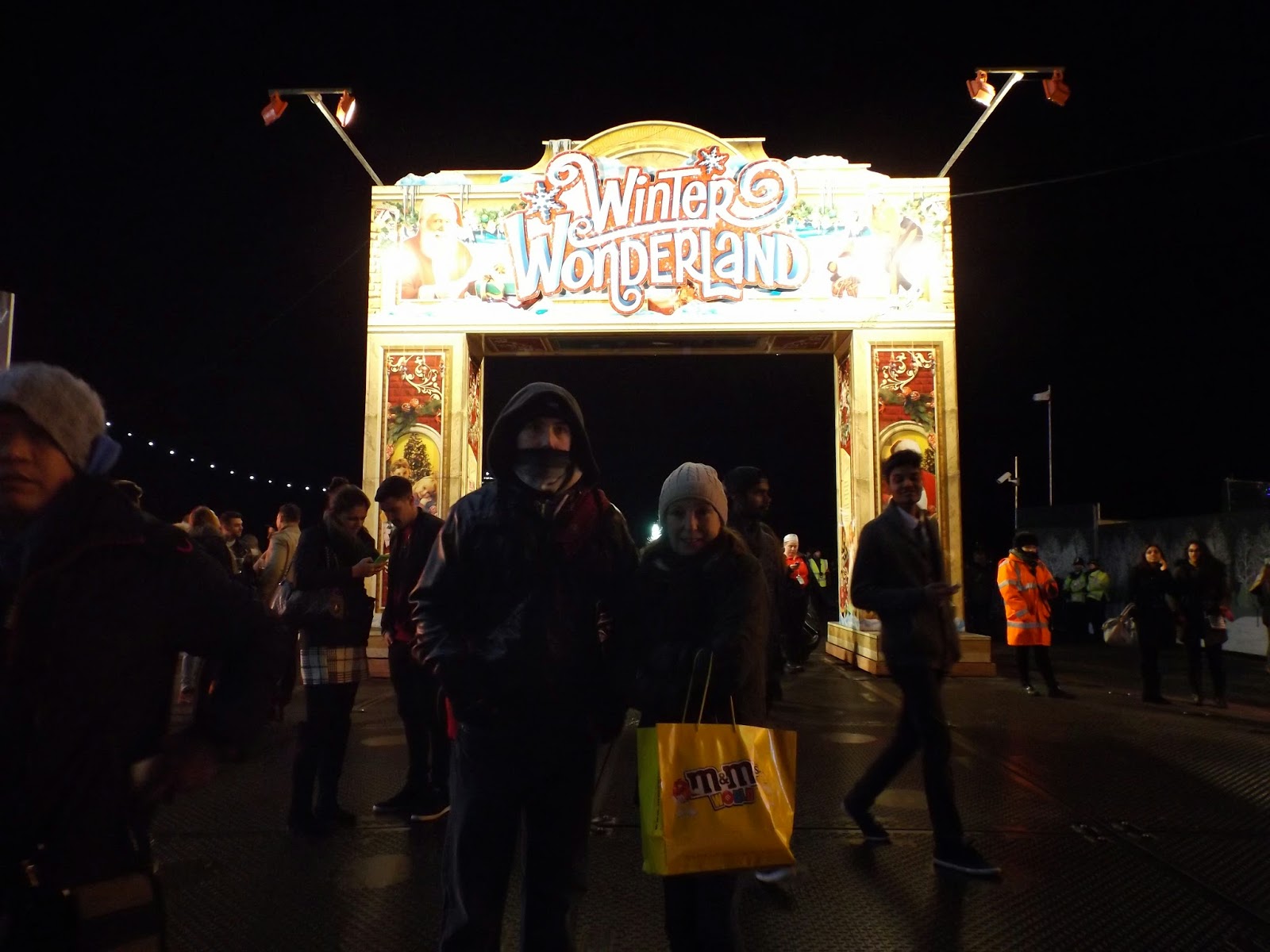 * Merry Christmas and a Happy New Year!
Posted by Unknown at 20:53 No comments: