Two caches is what I needed to find today to reach my milestone 300 finds. Two. That's easy. At least, that's what I thought when I woke up that morning lunchtime.

Today we were headed to Aston Clinton to find a simple traditional cache that would take me to 299 finds and a Wherigo called Rothschild Footprint that would be my 300th find. 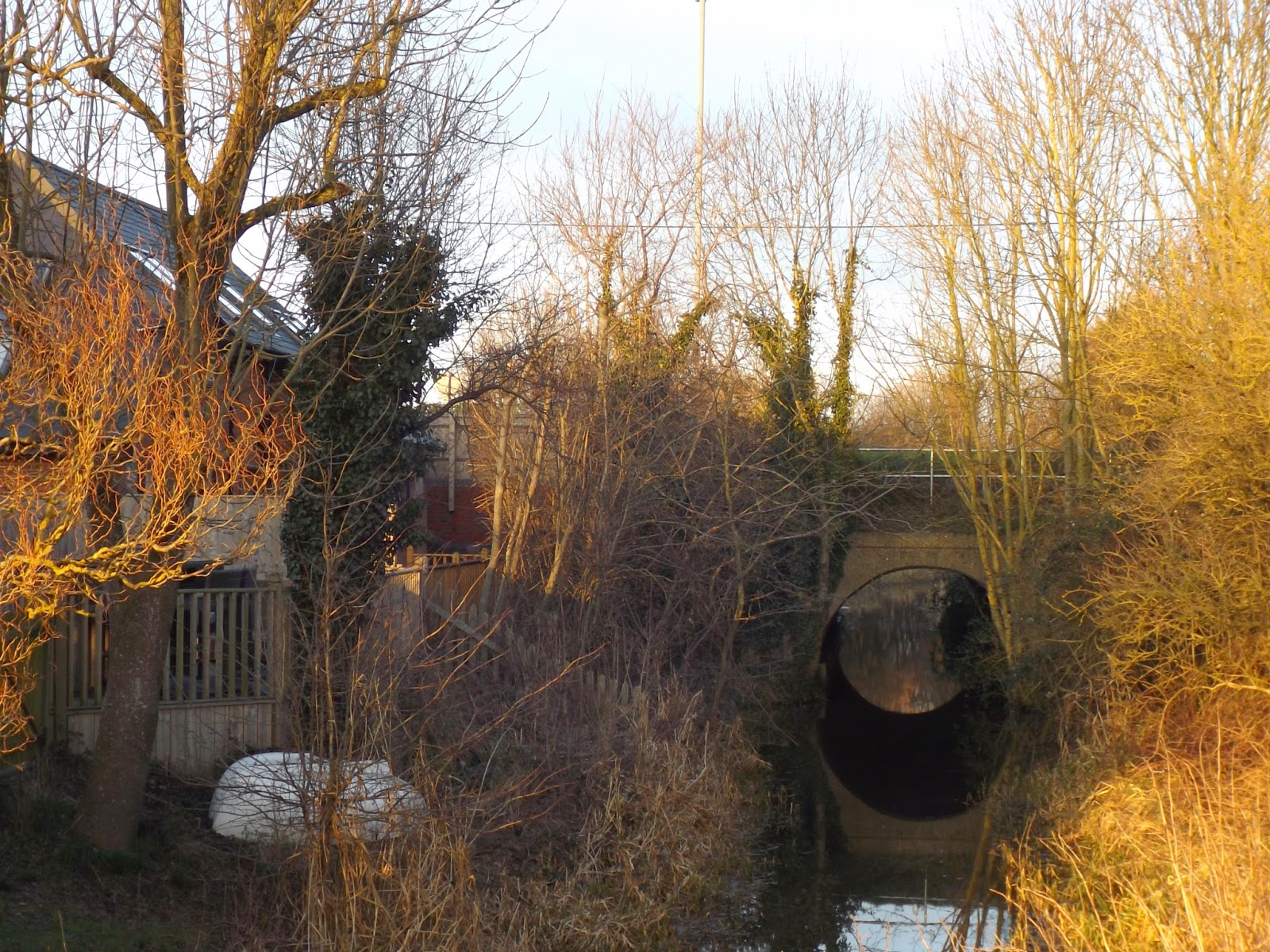 Having been to a house party the night before meant Nige and I didn't set out until gone lunchtime. Parking at the suggested spot for the Wherigo, we headed off for a nearby traditional cache before starting my milestone cache. We decided to take the long way round as it was such a nice day - if a lot cold - and walked along the river rather than the roads. As we walked along the footpath, admiring the houses and their gardens that backed onto the picturesque little river, it started to dawn on me that having a cup of tea before heading out was not a clever idea. Tea goes straight through me.

The first cache of the day was Alley-way treasure; a seemingly straightforward traditional located in - you guessed it - an alleyway. We got to the alleyway and followed the GPSr to where GZ should be. It took us about halfway through the alley. Looking around this spot, there was no possible place to hide a cache. We figured that the coords must be out so looked at previous logs for a clue. They were all saying what we thought, that the cache was anything up to 70ft away for some people.

I took a look at the hint. It was quite cryptic. I have a talent for cryptic crosswords though so figured out the meaning of that easily. We started our search but felt a little awkward as it was right next to someone's home; in fact, I was framed by their window at one point as I looked around.

We looked all over and still couldn't find the cache. I needed this find though so tried one last thing; I put a message out on the BBH group saying 'I was at GZ, couldn't find the cache, had anyone in the group found it before?' Thankfully, Smokeypugs came to our rescue. Unfortunately, they only confirmed what we already suspected. We had the right location and were looking in the right spot; the cache just wasn't there. With no other caches for this area loaded on my GPSr - yes, I've learnt my lesson, be prepared - I had to resort to my phone. A quick search on c:geo and some suggestions from Smokeypugs, we were soon on our way to one of the Aylesbury Ring caches. 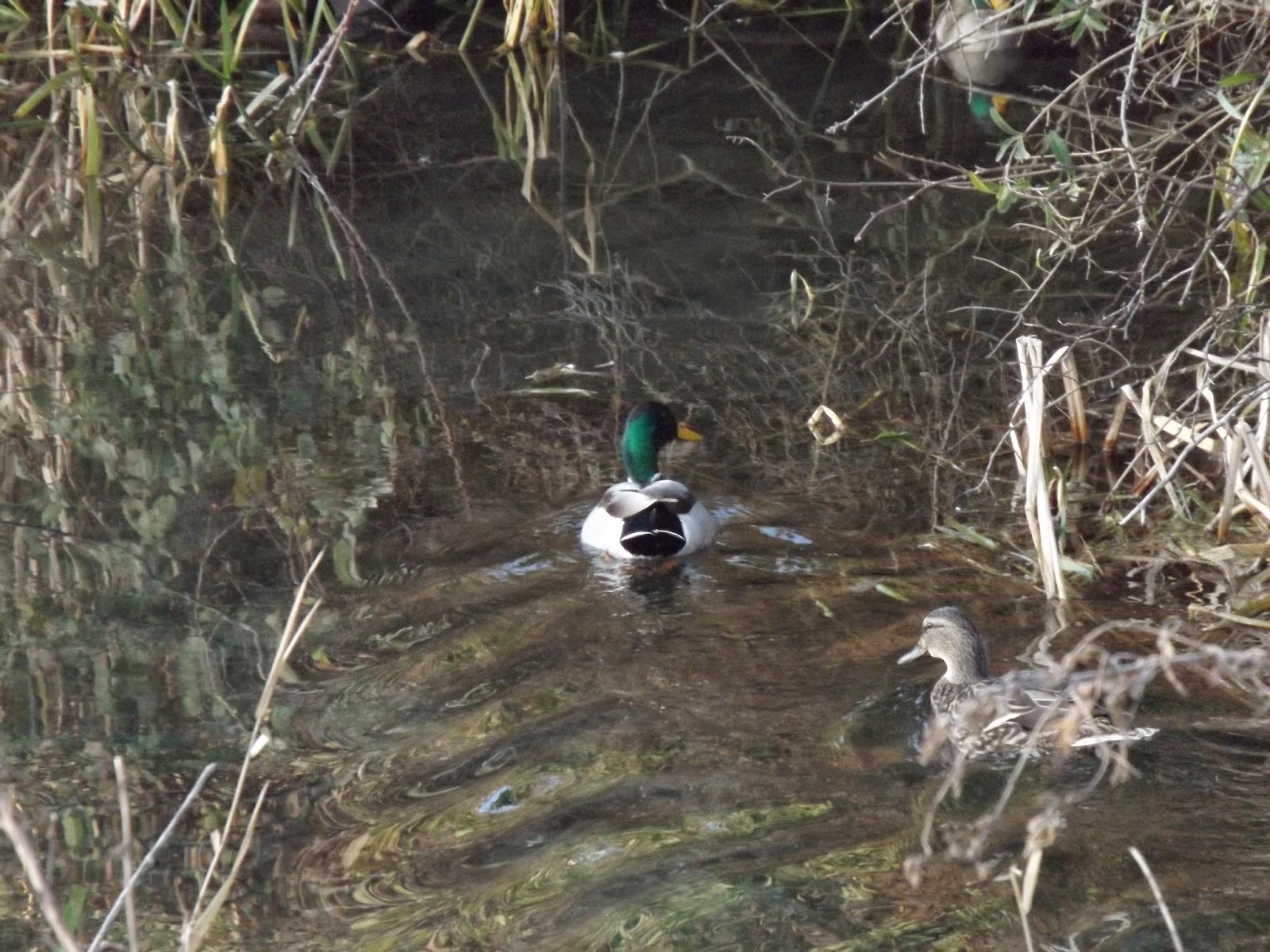 AR11 Mandarin - Stablebridge Road is one of many caches that make up the Aylesbury Ring series. A circuit that is split into seven sections; each one named after a species of duck. I was a bit reluctant to go for this one as I really want to do this series and would have preferred to do each section all together. However, time was getting away from us, we still had the Wherigo to do and this was the nearest cache to us.

We found our way to GZ easily and before we could get to searching, we had to wait for a few muggles to pass. After a glance up and down the way to make sure the coast was clear, we got stuck in. Searching all the obvious spots revealed nothing but then I spotted something a bit odd. I took a closer look but it still appeared to be a dead end. I thought I would have a fiddle anyway and to my delight, the log book was revealed.

Whilst I was disappointed that we DNFd the last cache resulting in us doing this one, I was pleased that we got to find this one. It has given us a taster of the rest of the series and I am itching to tackle it now (hopefully when the days get longer).

We had lost a lot of time on the previous two caches so it was late afternoon by the time we reached the starting point of Rothschild Footprint. Having successfully completed a Wherigo before at the Halloween Mega, I thought that this would be easy. Quite clearly, one done does not make one an expert!

I sometimes like to sing when I am out caching, on the walk between hides. This time however, as we made our way to the start of my 300th cache, I had the sudden urge to shout "This is Sparta!" much to Nige's chagrin.

I opened the Wherigo app on my phone and started the cartridge for this cache. I started moving about, trying to find the spot where the next stage would pop up but couldn't get it to work. Nige thought it may be my (not so) smart phone so suggested using his Mensa grade Galaxy Note complete with bells and whistles and super duper 4G. That didn't work either. It was getting colder and darker as we walked around in circles. As my mind started wandering to a place where there were luxury toilets with heated seats, I started idly pressing things on my phone only to find the next stage pop up! Hooray!

Finally, we headed off to find each stage of this Wherigo. As the time was getting on, Nige wanted to pick up the pace a bit. I have short legs though that look like Droopy Dog's when I try to walk fast, plus I wanted to read the bits of history that were coming up on my phone as we passed through each stage. By some miracle - read Nige keeping an eye on me and getting frustrated with me - I managed to walk and read at the same time without meandering into the road.

A couple of the stages required us to collect a couple of dates as we went along. We had to use a little ingenuity for one of these as it was so dark we couldn't make it out. We used a bit of paper and a pencil to take a rubbing, which worked really well. It wasn't until we neared the end of the Wherigo that I remembered reading on the cache page that we didn't need those numbers any more to find the cache.

After visiting various cool places around Aston Clinton, we found ourselves walking (in the dark) through a park and a field. I couldn't quite keep up with Nige and managed to lose sight of him for a few moments when, looking up from the phone, my glasses steamed up. I called out that I couldn't see and ran blindly towards his voice as he replied "Keep up you donut!"

We eventually arrived at GZ and found the final location. I am not going to say anything more, so as not to spoil it for future finders. All I will say is that even though I don't like spiders, I went there and I did it!

This was an awesome cache to find for number 300. I loved the Wherigo - once we figured out how to work it - and I loved the final location. I urge everyone to give this one a go... or any Wherigo for that matter. Thank you to happy hunter hp20 for adopting this awesome cache and keeping it from being archived.
Posted by Unknown at 21:47